“As I was standing at the Heathrow Airport arrivals gate, waiting to be reunited with my husband and two children, I was a wreck.

“I kept looking down because I was expecting my kids – who were nine and 11 when I last saw them – to be just as tall as when I left them.

“When they eventually came around the corner, I initially didn’t recognise them. It wasn’t until I saw my husband that I thought ‘where are my children?’ and they were actually in front of him but they’d changed so much!”

Anahi (not her real name) had not seen her husband or children for three years. It was eight years ago while working in Dubai that she found out that her home on the outskirts of Damascus had been destroyed and she had lost everything. Anahi was devastated. Thankfully she had moved to work in Dubai before the civil unrest in Syria.

Anahi grew up in Damascas, studied and became an anaesthetist in a state children’s hospital where she worked for 10 years. As tensions rose, Anahi and her husband decided to move to Dubai where he had been offered a job.  They worked in Dubai for 15 years and had two children but as friends and family began fleeing Syria, she realised it was never going to be possible to return to Syria.

But staying in Dubai was also not an option as they would not be able to get permanent residence. So, in 2014, they made the decision that Anahi would move to the UK where she hoped to get asylum and then bring over the rest of the family. The decision to split the family was a hard one but as Anahi spoke reasonable English it was thought this was the best route to finding a safe haven for the whole family.

“I felt scared about leaving them and moving to the UK because I knew how much I was going to miss them. But we thought that I had the best shot at being granted asylum and then we could apply for family reunification and they could join me.

“When I flew into London in April 2015, I felt a mixture of sadness at leaving my family behind but hope that everything would be sorted out and I would be reunited with them fairly quickly.”

Anahi stayed in a number of different hostels while waiting for a decision about her application for asylum.

“Waiting around every day was hard because you’re not allowed to work,” she explained adding that although she felt depressed and cried a lot, she was able to use this time to work on her English and – with WhatsApp – talk with her children and husband who were living in a flat in Khartoum.

Life got a little easier when Anahi found the charity Refugees at Home that connects refugees in need of accommodation with hosts in the UK willing to put them up for free. She was still missing her family but at least she had a comfortable and convivial place to live.

“I spent a couple of months with a family in London, but then I moved to accommodation with a retired woman, who was really lovely. Even though I felt embarrassed about living in her home without paying anything and I kept apologising,  she never made me feel unwelcome.

“Over time, we formed a friendship and she occasionally invited me out socially to meet her friends and fellow Refugees at Home hosts or guests. This is when I was able to form some friendships.”

One of those friendships introduced her to the volunteers that worked with Purple Packing at The Separated Child Foundation. Here she met Angela Gluck, a founder of the charity, and she joined the army of volunteer Purple Packers.

“She was a wonderful Purple Packer. As a ‘separated mother’, she had a special feeling for separated children, a deep empathy, an immediate sense of connection. I often thought that making Arrival Packs for lone refugee youths helped to satisfy her need—as an experienced and highly qualified paediatrician—to care for children, albeit not in a specialist way,” explained Angela who went on to say that all the other Purple Packers adored Anahi and warmed to her kind, patient and gentle spirit. 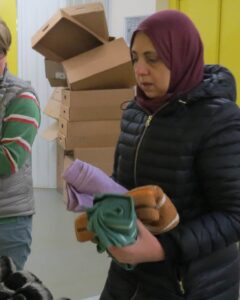 “She often said that she got more out of the volunteering than she put in. It helped her to focus on a specific project and, at a deep level, to give something back that would help someone else.”

On 22 December 2017, Anahi found out that she was being granted definite leave to remain. “I was so happy that I cried. I called my family and told them the good news and we all cried.”

This however was only half of the journey completed.  Now she needed to get her family to the UK. On 29 December, she applied for family reunification.

“I couldn’t wait to be reunited with them after being separated for so long,” she said.

It took just 40 days for the whole process to be finalised but there was one last hurdle.  How to find the money for the air tickets as they had used up all their savings? Salvation came when one of the hosts from Refugees at Home generously offered to pay for the flights.

“It wasn’t even a host who had let me stay with them – just a woman who I’d only met once and knew of my story.”

In February 2018, the host she was living with drove her to Heathrow Airport in the early hours of the morning so she could meet her family at the arrivals gate.

Anahi spent the following year completing her UK medical exams so she could work here.

“Being a doctor means the world to me because it’s my passion to be around patients and relieve their pain. I love using my skills and knowledge to help people because I feel it’s important to give back.

“It was a complete shock and very challenging starting work in a pandemic, but I’m comforted by the fact that I’m helping people. Medical staff from all different fields came together to work in the ICU and in those initial stages, no one was certain about anything. It was incredibly exhausting but gradually, I became more and more familiar with the system.

Anahi continues to work in intensive care and, although she finds the work challenging, she  is so glad that she can help give back to a country that has provided so much to her and her family. But it does not stop a longing to return to her homeland.

“I love Syria it’s my homeland. I wish it was a place where we could all live peacefully and safely. Sadly, it’s not,” says  Anahi.