The lasting trauma of separation

“Here we go again,” says artist Ruth Schwiening as she watches in dismay at the refugees fleeing from the Ukraine and especially the children who will be temporarily or permanently separated from their parents. Schwiening was a Kindertransport child, a Jewish refugee who came to the UK as an unaccompanied minor from Germany during World War II.

The social media posts showing Kindertransport memorials in London, Prague and Alkmaar draped in the Ukrainian flag are stark reminders to both of them of an early childhood lost. The memorials have the message  “safe passage now”  printed on a brown luggage label. The Kinder had luggage labels with a reference number.

Both look on with a mixture of horror and disbelief that the world has learnt nothing from history. “We are not a civilized race,” says Barnett, “Homo Sapiens,” she scoffs. “I think not. Rather Homo Semi Sapiens.”

It must indeed seem like history repeating itself to these two women.  Scenes of fathers placing their children on humanitarian trains not knowing if they will see them again. Children travelling without their parents because they had been orphaned by the war. And others just trying to escape with their mothers and grandparents. 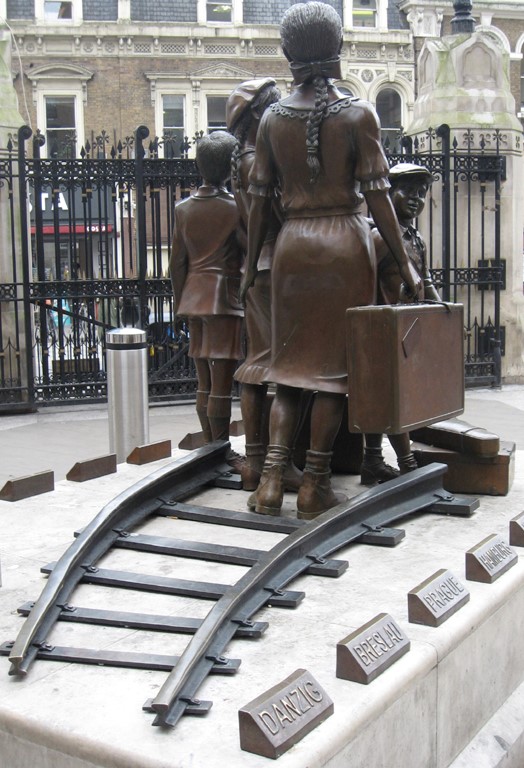 It is difficult to estimate just how many unaccompanied children are leaving the Ukraine. A few weeks ago Moldova reported that 500 had arrived. And the Irish Child and Family Agency said that they are now caring for 14 Ukrainian children out of the 95 youths who are seeking international protection.

Today’s Ukraine war is just one example of children being separated from their families, and although very much of the moment it is the tip of the iceberg.  In 2020 21,000 children with no parent or guardian applied for asylum in the country of refuge.  And in the year ending December 2021 the UK received 3,762 applications for asylum from unaccompanied children.

Many ask why The Homes for the Ukraine Scheme cannot be rolled out for the many unaccompanied children from other countries currently waiting for their applications to be processed.

“This morning I have read article after article about the funds raised for Ukrainian refugees, and my initial thoughts are: that’s great! Now, what about all the other children who are separated due to war and conflict?  Do they not matter as much as Ukrainian child refugees?” says Sarah Castro, Trustee at The Separated Child Foundation.

Unaccompanied children under 18 who arrive in the UK cannot be returned to an unsafe place and are under the care of the local authorities. But some children when they turn 18 may be expected to return to their country.

Local authorities say there is an acute shortage of foster homes for unaccompanied refugee children. One social worker commented that children who arrive here without their parents are traumatised and need careful monitoring, and she said that she hoped  that The Homes for the Ukraine Scheme did not include unaccompanied children unless there was a stringent monitoring scheme in process.

“While I fully understand the necessity to offer a place of safety to all children it is also very important that whoever is caring for them recognise the trauma that they might have experienced,” said a social worker who did not want to be named. She went on to say that even those children arriving with a parent or guardian will carry with them many traumas.

Childhood trauma is something of which Ruth Barnett is only too aware.

“The stress of separation for both parents and children is huge,” she says. “It is important to explain to children, even very small children, what is happening. Children pick up on danger, they sense stuff. You can’t hide it.  Nobody explained to me why I was on the Kindertransport. If you are not told then you just imagine and that is not healthy. I thought I was being sent away because I had done something wrong.  I needed some sort of explanation of why I was being put on that train – why I was being sent away.  I felt that I just wasn’t good enough. I felt rubbish and unwanted – and I had a deep feeling as a child that I had to be good always so I wouldn’t be sent away again.”

Ruth Schwiening recalls similar feelings of confusion and insecurity: “I was just three years and eight months old when I was put on the Kindertransport and I remember nothing. I wish I did. I have often wondered whether I would have parted with one of my children, even in such desperate circumstances. Would it not have been best to keep the family together? The question of whether my mother valued and loved me less than my brothers even crossed my mind. Why was I sent away alone and not my brothers? My deep-seated feeling of insecurity that refuses to leave me may have its roots here.  It never goes away. I was a bed wetter until I was 12.”

She tells the story of the snake that has seven skins. Each year the snake loses a skin, but when it comes to the final skin, it can’t shed it. “New skins just grow over but that old final skin will always be there,” she says.

“After my parents arrived and I went to live with them, every time I left the house my father would say, ‘Give me a kiss before you go.’ ‘I am only going down the road,’ I would reply, irritated. ‘Why do I need to kiss you?’  ‘Because I may not see you again,’ he would say.  That has always stayed with me.  That last snake skin is part of my inherited trauma.” 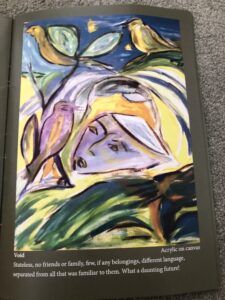 Interestingly she now opens her home in Market Bosworth to over 18 refugees who spend a day sharing art-related activities with Ruth and her husband. “I can empathise with these youngsters” she says. “Most of my life I have had a feeling that I don’t really belong, and I think many of these young people feel the same.  But we don’t talk about their experiences. We just share a day together doing art and enjoying the countryside.”

Both Ruths are now in their eighties.  Hindsight  and experience have allowed them to reflect on what happened at such a young age and how it affected them throughout their lives.

“It needs to be recognised what happens to a family that is split up in war because it’s happening now all over the world. Children being separated from their families is traumatic and there are lessons to be learnt from this, such as implementing in the UK a more family friendly refugee policy,” says Barnett.