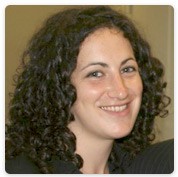 The Separated Child Foundation was set up in memory of Ester Gluck. Compassionate and creative, Ester was deeply committed to working for the benefit of refugees and people seeking asylum. In particular, she cared about the needs of young refugees, especially those who have become separated from their parents and close family.

She was a pupil at Salusbury Primary School, Queen’s Park Community School and Parliament Hill School, all in London. She sang in the school choir, performed in several plays, played oboe in the orchestra and was involved in a number of social action projects.

After a gap year spent working with children in England and Israel, she took a degree in psychology at the University of Cardiff. When choosing her university course, Ester had in mind to train as a psychotherapist, specialising in recovery from trauma. But through significant experiences as play-leader on a student-led project for refugee children, she developed increasing commitment to refugees and people seeking asylum. 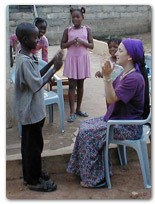 Ester spent two summers in Ghana on behalf of Tzedek – ‘Jewish action for a just world’. In the first, she and a friend set up a volunteer programme and in the second she led a team of volunteers on a range of educational, vocational and medical community projects.

Whilst in Ghana, she had close contact with one of Africa’s most distinguished writers and social activists, Ama Ata Aidoo. When The Separated Child Foundation was set up, Ama Ata Aidoo agreed to be a patron. As a tribute to Ester, in 2007 she also wrote ‘A Note from Ghana’, which can be read below.

On graduation from university, Ester volunteered for several organisations, including the Refugee Council, Salusbury World and the London Detainee Support Group (LDSG). She was later appointed to a full-time permanent position at the LDSG (now called ‘Detention Action’).

Although still young, she shouldered challenging responsibilities and was a constant source of encouragement, inspiration and good spirits for all with whom she came in contact.
In whatever spare time she had, Ester was a founding and very active member of ‘The Muju Crew’, a drama group of young Muslims and Jews based at The Tricycle Theatre, north London. She was a talented actor, mimic and comedian, and was also well known for her beautiful singing, in both sacred and secular settings.

In her many circles of friends, Ester was famous for her love of the colour purple. At her funeral, a friend referred to her as ‘our purple princess’. This was later adopted as the name for a blogspot dedicated to her memory. The many tributes from people whose lives she had touched contain poetry, song, metaphor, pictures, stories, memories, jokes and prayer. They express not only deep sadness but also gratitude and awe, and determination that Ester’s life’s work should continue. They can be read at the Ester the Purple Princess site.

‘Where is heaven, Ester?’ was created in 2007 by award-winning sculptor and co-founder of ‘Separated Child’ Jonty Hurwitz. He explains that it “explores how it is possible to inhabit two spaces at a single time”.

American singer-songwriter Arnie Davidson never met Ester but heard about her through mutual friends and was inspired to compose ‘Ester Adjuah’ in December 2008. ‘Adjuah’ is the ‘day name’ Ester was given in Ghana because she was born on a Monday. In November 2011, Arnie re-arranged and recorded ‘Ester Adjuah’. Arnie Davidson wrote in March 2016: “Sometimes, a word or phrase jogs a memory. Sometimes, we feel alone and disconnected. This is a (true) story about the interface between the two that is so unusual, I could never have made this up. We’re all connected, sometimes in unlikely ways… I heard many stories about Ester… I developed a picture of who Ester was in my mind… I wrote a song for Ester, who I never met, but whose courage and activism during her few short years, far surpassed what many will accomplish in a lifetime. I was inspired. Through her work, her presence was magnified and lives on… As current news reports to us about the huge influx of refugees in Europe and the UK, I recently thought of The Separated Child Foundation, who were helping refugees when their numbers were in the teens a decade ago… Ester’s work continues… Somehow I became a participant in the story of a strong young woman from London, whose life ended too soon, personally mirroring her volunteer trip to Ghana, and providing a soundtrack for the continuing work supporting Separated Children.”

‘A Note from Ghana’ by Ama Ata Aidoo

Dear Ester,
You
Hair-braiding
Doek-wearing girl-Brit:
You burst upon us
With dancing eyes, and
The most wondrous spirit…
…Ever.

Clambering up and down
Ancient kombis, 207s, and
Sundry other rickety, rusty, and risible
Moving machines of
Doubtful even-these-roads’-worthiness,
beating market mothers at their game.

You stride through our
Mini jungles and maxi environmental challenges
With the ease of
Not just another native, but a never-left.

Or at the very least, like any returnee, with
Affections to restore,
Rights to claim,
Structures to repair.

We are greatly amazed by just how much
You remind us of the
Working conquering queens
We have known:

Ask London about Yaa Asantewa, and
Lisbon, of Nzingha.

But talking of markets,
What was it with you and me and
Makola:
Our vast, long-suffering
City centre choked full of chaos, commerce?
And…and…
Makolet?

Then there were those
Good-natured but endless
Questions,
Philosophically exciting,
Intellectually intriguing, on
Which of our nation’s ethnicities are
The true bearers of Hebraic matrilineal retentions?

Akan overlords who, in reality,
Can only rule if sanctioned by the female line, or
The Gas with their latter-day patriarchies and
Ancient subsumed theocracy?

Your royal highness,
The great debates you initiated on our shores
Are not about to end just yet.
And we are not even sorry.

Oh, see how you trail your queenly umbilicus from the womb
—needing not a second of
Princess-hood…

You Ester,
Are nobody’s candle in the wind.

A bird? Perhaps.
Some wildly joyous morning thriller
With the lightest wings of the longest span,
gloriously hued:
Ochre, silver, and glowing indigo,

Who swept through our universe, and
Brushed lightly past us as she flew…

Adjoa Ester,
It is true
You are not here.