All of a sudden – they switch!

I’m just here to talk about life in London.

As you have heard, after going through all those ordeals in Home Office and going through some difficult experiences in life, we are meant to settle down and integrate with the community. Some of us may be posted outside London or somewhere else in the UK but for us who have been posted in London we more or less face the same kind of life in the UK, in the same context.

But I will talk much about London as I have been in London now for around a year and a half. I won’t say it has been really easy for me in London but I have tried my best to cope with it because when you go through the hardship you went through before you came here, you also need like to integrate with the community, go to college, meet students there, or new young people like us and kind of start off life.

But the real problem comes with fellow students. There has been a lot of kind of discrimination and sidelining, if I can say, because first you meet these young people like you, you talk, you share things… you become friends. But later on you tell them you are a refugee or an asylum seeker and, all of a sudden, they switch. If they were smiling with you, hanging out with you, now that they know you are a refugee or an asylum seeker, they don’t want to be seen around you. They won’t be free as they were before, you know. Before they would hang around with you, but now they would be just smiling at you but they don’t want a lot to do with you anymore. 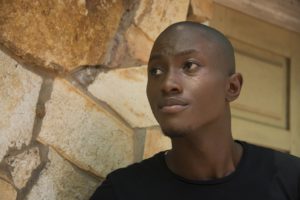 If you didn’t tell them, they would still come to figure it out because you don’t have the same accent as them, you have a different accent, an African accent, and then “Oooh! He’s not one of us, but he’s all right.”

Later you come to discover why. I apologise for saying this, but it’s from the media, you know. Because it’s the way the media has portrayed refugees and asylum seekers. If one person has done something wrong or is a criminal, instead of dealing with that person as a person, they kind of generalise it and say, “Asylum seekers they are lawbreakers. They are criminals!” and all that kind of thing.

Then the parents who read these things or listen to the media, they’re going to tell their children the same thing. Then their children, when they go to college, they’ll be among asylum seekers and refugees, and they’ll be put in mind what they have been told by their parents. That’s how it becomes so hard to integrate with the community in the college or where we live actually.

We’re always told that London is multicultural. I think that’s a really textbook reference but it’s not in the real sense integrated or multicultural because—well, it’s my opinion but I think—today the reality is that there is not that kind of integration. I mean, we normally see a certain population in certain places. For example, probably they would say that East London is for Blacks. Even in colleges, for example in my own college, there are those kinds of courses that are quoted for Blacks or there are those courses that are quoted for different kinds of people. Then I wonder: what’s the integration?

I mean, when we say multicultural is that because we have an Asian, a Chinese, a White, a Black in London, yeah? That’s a textbook thing. But how are we integrating together? We don’t see that much, even in colleges, we don’t see much of the thing that they say. I think they just say it because they want to be portrayed as a multicultural London and all that kind of stuff. But in the real sense, I don’t think there is that much integration. We still miss that kind of integration.

And, you know, when you are young, as a refugee or an asylum seeker, you just want to come to a community where you would be completely accepted by everybody, regardless of where you come from. You just want to be accepted by everybody. But because that acceptance is not there, you will end up staying around with your fellow refugees or sticking around with the other young people from your background because you are not so sure that you will be accepted by outside there.

Yeah, it has been very tough in London and you can’t tell that by just watching people in the streets. It’s more than just walking on the street and just seeing somebody. People have a really different life and experiences, which need to be embraced by everybody.

Having said that, there are also a lot of positive things about London. If you are lucky to get into college, then you are assured that London would be one of the best places to go to college to study because they have the best education and recognisable qualifications. But that is if you are lucky, because sometimes it is not that easily accessible because they ask you for your status. If for example, you still don’t have your status, then you ain’t going to go to the college. But if you get that, then you are assured that you are going to get the best education, probably one of the best educations in the world.

And in London, there are a lot of colleges—for example, in each borough you find two or more colleges—so there is a free range to choose from if you are really into education.

If you are lucky enough to get your status here, still if you are an asylum seeker, you can’t work, you can’t do anything so life is grounded somewhere or it is put to a halt. But if you are lucky enough to get refugee status, then one way or another, you can start your life all over fresh again. Even though you have a lot of difficult things to deal with in your life, still you can start all over fresh and it’s an opportunity because London has a lot of opportunities, work and that kind of thing.

Thank you very much.