My day at the home office

I came here today to tell you about one of the longest days I have ever experienced since I have been in England. I am talking about the day I spent at the Home Office.

The person who had brought me into the country had just abandoned me in front of this huge building. I was standing there on my own. I was told later that this place is called the Home Office. I was forced to enter the building by an officer who asked me to explain why I was staring at the building like that. I quickly told him about my misadventure and he invited me to follow him in. This is when my ordeal started.

Firstly my rucksack and I had to go through security checks and a metal detector. At this point I did not know what I had done to deserve this treatment. Then I was questioned on my age and identity in the coldest-hearted manner. “What is the name and age you used back in your country?” Without any explanation, I was asked to take a seat and wait to be interviewed later on. Before finding a seat, I had to look hard for a comfortable one, which I couldn’t find as they were all metallic. It felt more like being in detention. 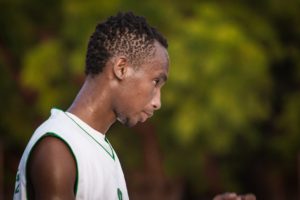 The day was a nightmare. I could see people crying, being very anxious and some were even arrested. Finally, it was my time to be interviewed. When they came for me, I prayed for God’s help because I couldn’t face the stress on my own.

My interview was in two parts as I am under-aged. This took three hours. You can imagine how tired I was. I was starving, as I hadn’t had a single meal in the entire day. After an hour, a woman came to me and asked me to follow her. This was the end of my nightmare.

In spite of this experience, I would like to thank the British government for all it has done for me. For now I am under their protection and they offered me the chance to be equal and achieve my goals like any other British kid.